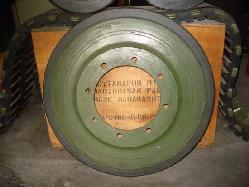 For over 50 years Roncaglia® is engaged in manufacturing rubber products for use in military vehicles. The new wheels are used stickers and it removes the worn rubber material and re-glue ensuring the same durability in both cases. Caterpillars are also made of metal and half-tracks and rubber pads for steel tracks. In the laboratory has developed rubber compounds highly tear resistant and abrasion to which they are subjected military vehicles. Roncaglia® has been involved since its inception in the manufacture of wheels for the historic Sherman, the AMX 13, AMX 15,SK 105, TAM and Halftrack Diamont T and M 113. This facilitates the fabrication of pieces by its age or modifications made and not on the market. 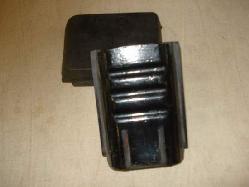 Roncaglia® manufactures crawler pads VVC vehicles TAM family since the beginning of the emergence of TAM. Manufactures all the components of both metal and rubber, compounds developed in his laboratory that met over the original specifications. 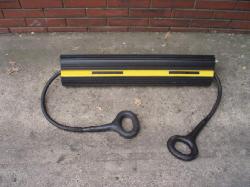 RONCAGLIA(R) manufactures several years shims for use in the service ramp, aircraft parking and airport hangars. Are intended to prevent movement that wind can cause an aircraft on the ground. For your travel more comfortable molded handles are fitted to protect the hand of anyone handling. This model greatly improves the classic hemp rope with knots at the ends, is registered as a design improvement by Roncaglia. Shims are identified with the name of Carrier and three heads are in reflective paint for better viewing in the dark. We also produce larger shims to maintain large-sized vehicles immobilized as those used on the beaches in containers and port terminals and cargo areas aeronafta in Airports. 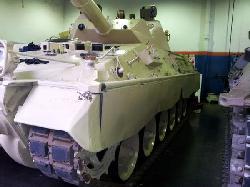 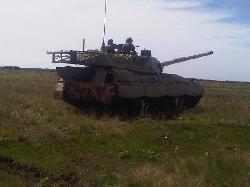 Within the project of modernization of the Military Vehicle TAM faced by the Argentine Army, whose first prototype – called TAM 2C – just delivered the Israeli company Elbit System, RONCAGLIA® has been involved with the provision of the side skirts which reduce significantly the effect “spray” produced by dust removed by the undercarriage during circulation in desert areas, which made it easily detectable over long distances. These skirts also help to reduce the heat signature produced by the undercarriage. The side skirts are added to the front and rear RONCAGLIA® manufactures for years.

The most important steel manufacture argentine company has employed the RONCAGLIA® SLEEVE for steel sheets coils winder and de-winder mandrels, since more than 30 years in his five plants.
The use of this rubber sleeve, allows:

3-to protect mechanical mandrel systems. When you use Roncaglia® rubber sleeve, you have an additional advantage; you are protecting the mandrel mechanisms from dust, which can affect the normal operation.